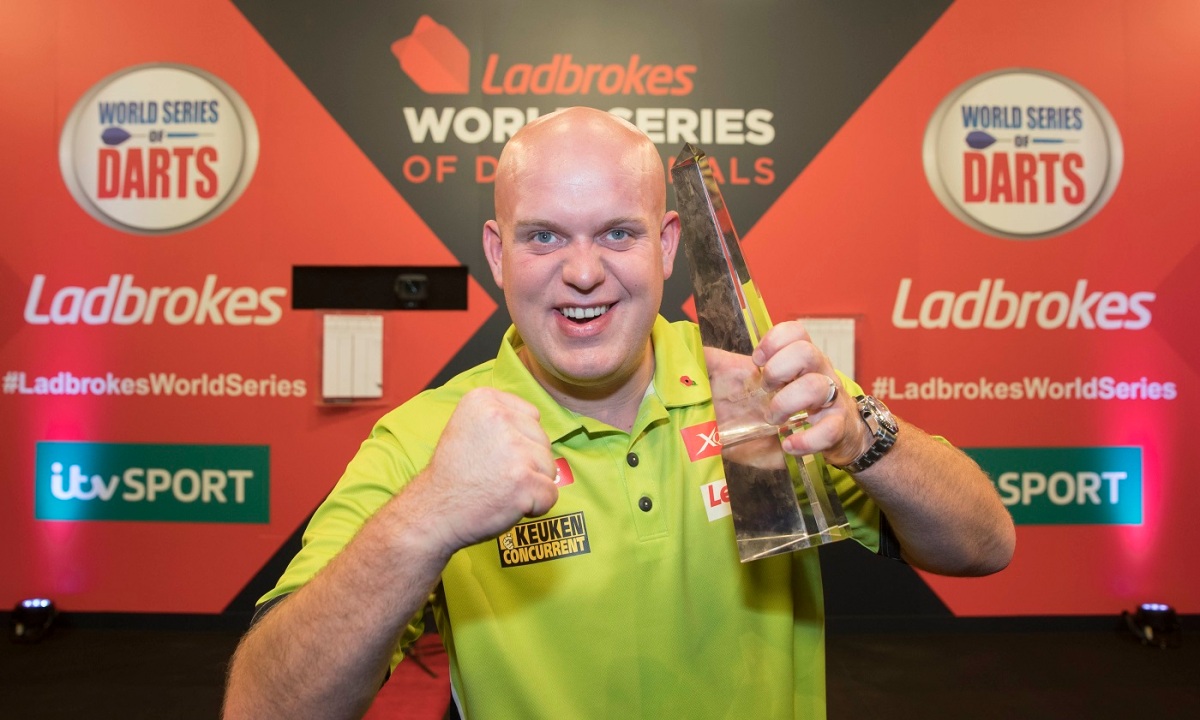 Title number 23 for Michael van Gerwen in a record-breaking 2016 was secured on Sunday night, with victory in the Ladbrokes World Series of Darts Finals.

The world number one continued his excellent season on the PDC circuit by edging out Peter Wright 11-9 in the final, in a repeat of the deciding game 12 months ago.

Van Gerwen had defeated Wright 11-10 in the inaugural World Series of Darts Finals last year, and the pair once again met in a televised final at the weekend, and once again it was the Dutchman who was celebrating with the trophy.

It was a third successive televised title for van Gerwen, following his wins in the World Grand Prix and European Championship last month, and backed up the top seed’s World Series victories in Shanghai and Perth earlier this year.

For Wright, it was an eighth defeat in eight televised finals, one short of the nine racked up by Terry Jenkins, and six of those have seen him beaten by MVG.

Wright picked up wins over Daryl Gurney, Joe Cullen and Phil Taylor on his way to TV final number eight.

The semi-final victory over Taylor was one of the most dramatic games of 2016. After Taylor hit back from 5-2, 6-4 and 8-6 down to go 10-8 up, and on the brink of victory, Wright reeled off three legs on the spin to triumph in the deciding leg.

Scottish-born Wright was certainly aided by a partisan Glasgow crowd, as Taylor missed several match darts to progress, but after hitting 13 180s and averaging 105, Snakebite produced an inspired performance against the 16-time world champion.

Van Gerwen enjoyed a more comfortable run to the final as he brushed aside Saturday’s narrow 6-5 win over Gerwyn Price with an unplayable 10-0 whitewash of Simon Whitlock in the quarter-finals, before sweeping past Dave Chisnall 11-3 in the semi-finals.

The final proved to be a close affair, with the lead changing hands three times as Wright took an early 4-3 lead.

Van Gerwen then won five of the next six legs to take a firm grip on the game and move 8-5 up.

And after claiming two of the next three legs to go 10-6 in front, it looked like the outcome would be victory for the Dutchman.

But Wright, backed by the Glasgow crowd, rallied and won three successive legs to close to within one.

Van Gerwen had spurned match darts during that run and missed even more in leg 20, but this time Wright could not capitalise, and van Gerwen hit double two to seal the title.

“This is another great win for me,” van Gerwen said.

“I had to work really hard. Peter played really well but I’m really glad I won the game.

“I compete in tournaments to win and if you do win then you get great confidence, and I’m feeling good.

“I played okay this weekend and it’s a good tournament in preparation for the Grand Slam of Darts.

“Things are going well for me. I’m winning most of the tournaments and I’m a happy man.

“My confidence was not that great in the final. I didn’t play well, my darts went in the board a bit strange.

“But I won the game and that’s the most important thing.”

Wright was left to rue another defeat in a TV final against MVG, but believes he is not far away from breaking his duck and winning his first TV title.

“When you come home to Scotland, I try and play well for the fans and I think I do,” the world number five said.

“The crowd got me through in the semi-final to play against a great champion in Michael van Gerwen.

“I’ve found the right dart now and I’m sticking with it, and I’ll get back on the practice board.

“Many people out there believe that when I win my first TV title I’m going to win lots after that, and I believe that too.”

Another weekend, another title for van Gerwen. Can he continue his dominance at the Grand Slam of Darts? It is hard to see anyone stopping him right now.