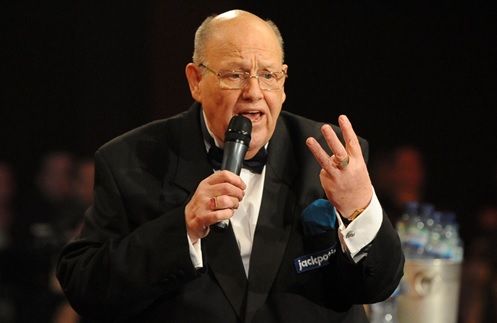 Eric Bristow and Raymond van Barneveld led the tributes for retired master of ceremonies Martin Fitzmaurice, who sadly passed away aged 75, on Thursday.

Fitzmaurice was involved with the British Darts Organisation as a caller, scorer and a referee, but his most memorable role was as an MC, where before introducing the players onto the stage he would pronounce his popular “let’s play darts” catchphrase.

Bristow, whose fifth world title success in 1986 was chalked by Fitzmaurice, posted on Twitter: ‘Sad to hear BDO front man Martin Fitzmaurice died today. All the best to his family.’

Van Barneveld, who won four of his five world titles in the BDO where Fitzmaurice was at the time the MC, also paid tribute on Twitter: ‘Sad to hear that Martin Fitzmaurice passed away. He was a true icon in darts. The voice of darts for a long time. RIP Martin.’

Fitzmaurice was born on June 3, 1940 in Kensington, London, but his early years were spent living in Wales as the Second World War kept him away from his hometown.

On his return to London, Fitzmaurice would go on to attend the St. Clement Danes Holborn Estate Grammar School for Boys, where he completed his A-levels.

Before his association with the BDO began, Fitzmaurice had jobs working in a solicitor’s office, as an electrician and a tube train driver.

A move to the Essex town of Colchester saw Fitzmaurice’s involvement in darts really begin, as he was asked to chalk a match in a local pub.

After refereeing a youth match in Essex, Fitzmaurice was asked by Bobby George to referee for him during his exhibition matches, as his regular referee Freddie Williams was unavailable.

It was a partnership which would blossom, as the duo worked together for the best part of five years, before George’s persistence saw Fitzmaurice gain a role working with the BDO.

When caller Jack Price was taken ill during the 1985 World Masters, George persuaded the BDO to use Fitzmaurice as his replacement, which started the Londoner’s near 30-year relationship with the organisation.

Fitzmaurice played a part in a moment of darts history at the 1990 World Championship when he was the referee on stage during Paul Lim’s nine-dart finish, the first achieved in the tournament.

In an interview with the BBC back in 2004, Fitzmaurice recalled it as his favourite memory at the Lakeside Country Club, when he said: “It would have to be the nine darter by Paul Lim in 1990.

“I was fortunate enough to be the referee for that match It’s the first and only time a nine-dart finish has been thrown at the Lakeside. No one else can claim to have been the referee.

“It also gave me nightmares. You have little room to manoeuvre up there, and when he hit the final treble 20, it covered double 12, so I couldn’t see it directly.

“So he threw it, the crowd went into bedlam, and I called: “Game, shot…” And it was only then that I checked it was in.

“At two o’clock in the morning, I woke up in a cold sweat, thinking: ‘What if it hadn’t gone in?’”

Fitzmaurice would go on to be the BDO’s master of ceremonies up until 2013, when he resigned after making racist comments at that year’s British Internationals.

In his resignation letter to the BDO he wrote: “No offence was intended, but I now realise that I should not have used material with racial references.

“I am proud to have been an integral part of the BDO for the last 27 years, and I have only ever given my full support to the organisation, players and officials.”

Fitzmaurice’s departure from the BDO left a bad taste in the mouth for darts fans, but few can argue the role he played in the sport.

His popular ‘let’s play darts’ catchphrase may not be used by current MC Richard Ashdown, but the BBC’s charity programme ‘Let’s Play Darts for…’ shows that his legacy will always be remembered.