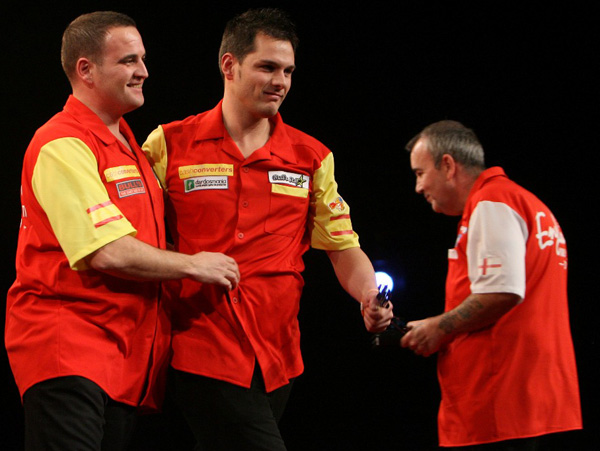 England get their bid for a fourth Betway World Cup of Darts title started tonight against a nation they will know plenty about.

The first staging of the PDC’s World Cup back in 2010 saw top seeds England, then comprised of Phil Taylor and James Wade, take on Spain in the second round.

Taylor and Wade took a 4-2 lead and looked on course for victory, before an 83 checkout on the bull by Spain’s Antonio Alcinas and a 125 checkout by Carlos Rodriguez in successive legs turned the tide.

In the decider, an 11 darter saw Spain pull off the upset, and six years on from that famous game, the two nations meet again on the World Cup stage tonight.

“It was incredible and very exciting because it was my first year playing in the PDC,” Alcinas recalled.

“The win against England was something I never thought we could do, but in the end we played very well and we also had a bit of luck to get the win.

After knocking out England, Alcinas and Rodriguez went on to reach the semi-finals of that year’s World Cup.

A quarter-final appearance followed in 2013, while last year the new pairing of Alcinas and Cristo Reyes were knocked out by Belgium in the second round.

Mallorca-based Alcinas has struggled to reach the heights of his pairs career on the main PDC tour, with Reyes having taking over the mantle as the number one Spanish player in the organisation.

After winning the Iberian qualifier to earn a place at the 2015 William Hill World Championship, 28-year-old Reyes has been rising in the PDC and heads into this year’s World Cup in 43rd spot on the Order of Merit.

“Cristo can play and if we beat England again it would be quieter because people know he can play very well,” Alcinas added.