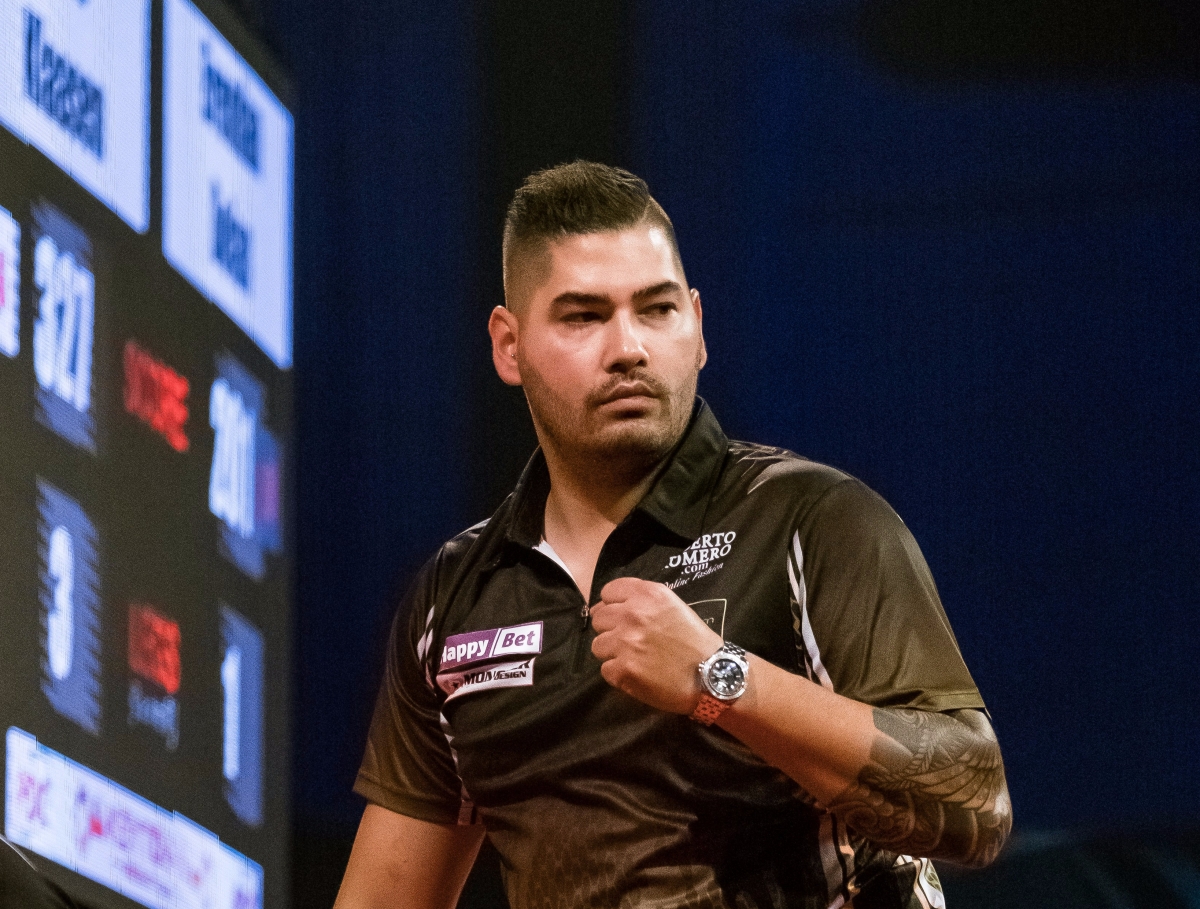 Jelle Klaasen recorded his highest average since his surgery in May, averaging over 97 in a 6-4 win over Brendan Dolan, in the second round of the HappyBet International Darts Open.

The pair exchanged breaks for the first three legs, before Klaasen held in leg four. Klaasen nearly broke again in the fifth leg, but didn’t get a dart at bull after missing a big number. That allowed Dolan to step in and trim the deficit to a single leg.

However, Klaasen was clinical on his throw the rest of the way, winning five of his six legs in 15 darts or fewer.

The winning double seemed elusive, as Klaasen missed six darts over the last two legs at double. But he eventually pinned double nine for the 6-4 victory.

“I’m happy with the way I played,” Klaasen told Love The Darts after the match. “I know I missed a few doubles at the end, but a 97 average isn’t bad.”

The win follows off a quarter-final run two weeks ago in Mannheim, Klaasen’s best run since having surgery on his wrist in May.

“I’ve been practicing one or two (hours) every day because I can’t practice too much yet,” Klaasen said. “But the feeling is good, and wins like this give you confidence.

“Confidence is maybe 90 per cent (of where I’ve struggled since the surgery).”

Joe Cullen put in the performance of the afternoon—and one of the best all year on the European Tour—averaging 113.77 in a 6-1 win over Richie Corner.

He then finished the match with a 116 out for a 15-darter. Cullen missed only five darts at double the entire match.

“I want to progress,” Jacques said. “I feel as though I’ve had building blocks all the time, and the next stage was to get to the final day of a Euro Tour.”

Van de Pas started strongly, breaking in the first leg, but barely got a look the rest of the way. Jacques immediately broke back, taking out double 19 for a 14-darter, before breaking again with an 11-darter in leg six for a 4-2 lead.

There was no way back from there, as Jacques took out 77 to hold in leg seven, before closing the match out on double nine. Jacques only missed four darts at double for the match.

“I improved a lot on yesterday,” Jacques said. “My finishing is sometimes what let’s me down, but you can’t argue with that (performance).”

Gerwyn Price started the afternoon with a victory, beating Ireland’s Steve Lennon 6-4. Both players traded blows early, with Price taking out 167 to break and Lennon a 110 to break straight back.

There were near misses too, with Lennon wiring the bull for a 161 of his own, and Price twice missing double eight, once for a 124, and later for a 136.

However, Price was too much in the end for the young Irishman, as he took out double two to win the match. Price—who was over the ton much of the way—averaged just over 99 for the match.

Ian White overcame a slow start in the second match to beat Keegan Brown 6-3. The two exchanged breaks in the first two legs, including a 22-darter by Brown in the first leg, before White found his groove, wheeling off four legs on the spin. Brown pegged two back, but White took out double 10 to finish the job.

Mervyn King was also a winner Saturday, as he beat Greece’s John Michael 6-2. Michael actually had the higher of the averages, as he averaged just under 95, but King created more chances, as he had 18 darts at double.

In the final leg, both players were left on 121, with Michael missing the bull. King would not let him back in, as he took out the 121 for the match. King and Michael then performed Michael’s trademark Greek dance before Michael departed the stage.

The next two matches featured strong performances from the Huybrechts brothers, as both Kim and Ronny won through.

First, Kim Huybrechts put in the second-highest average of the afternoon, averaging over 99 in a 6-1 win over Christian Kist.

Kist never got going. He managed only two darts at double over the first five legs, and six for the match.

Kim Huybrechts meanwhile was clinical. Although he only had one 180, he had 11 scores of 131+ in the match, as he progressed into Sunday.

But Ronny Huybrechts—who went six darts into a perfect leg in leg six—was much the better player, and rolled out with a comfortable victory over the Spaniard.