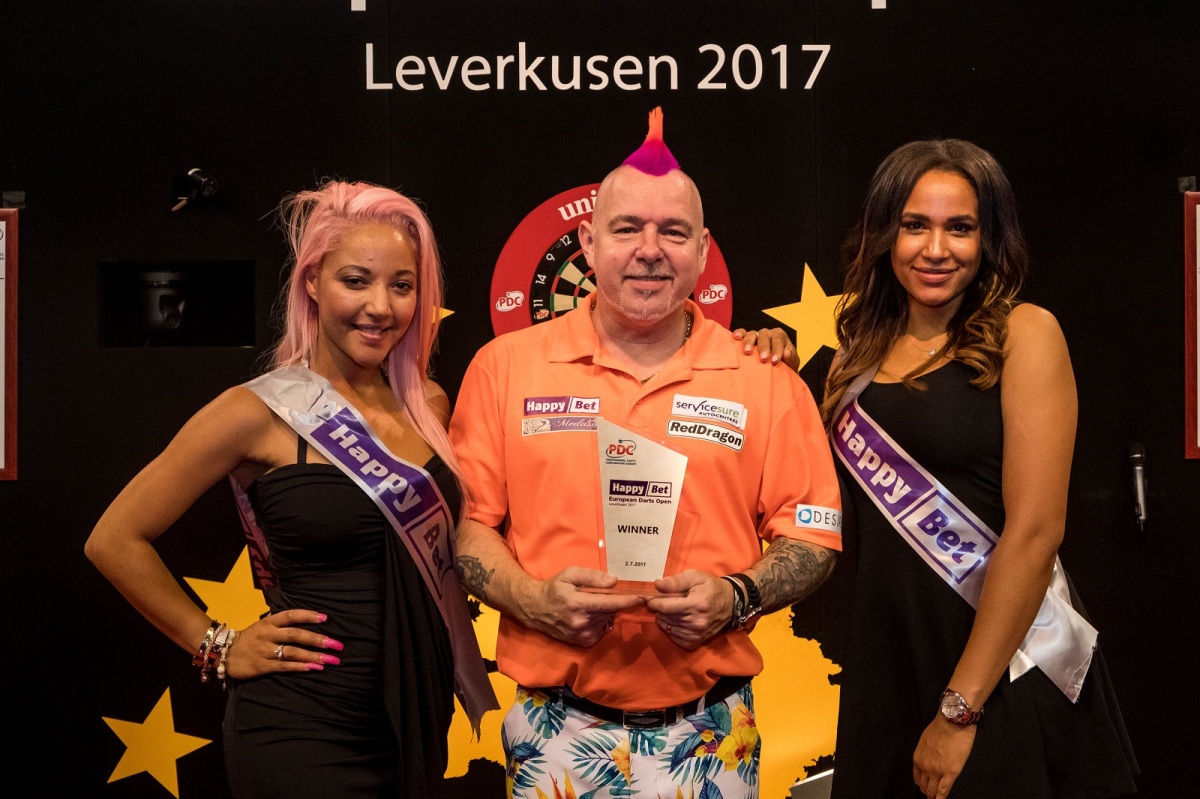 Peter Wright claimed his fourth European Tour title of the year after beating Mervyn King 6-2 in the final of the HappyBet European Darts Open in Leverkusen on Sunday.

The world number three had saw his impressive 2017 form dip in June, with no quarter-final appearance in five tournaments, but bounced back to pick up the £25,000 top prize and win his ninth PDC title of the season.

With three tournament victories already under his belt on the European Tour this year, Wright thrilled the capacity crowd at Leverkusen’s Ostermann Arena with another sublime showing as he denied King in his first European Tour final in almost three years.

A 6-1 victory over Robbie Green on Saturday got Wright’s campaign off to a flying start, before wins against Stephen Bunting (6-3) and Dave Chisnall (6-1) put him through to a semi-final clash with Mensur Suljovic.

The UK Open champion averaged almost 100 as he battled back from 3-1 down to edge past Suljovic 6-3 and advance to his fourth European Tour final of the season.

The final saw Wright come up against his former doubles partner King, the duo previously winning the Gold Cup pairs together way back in 1995, with the world number 20 the first unseeded player for close to 18 months to reach a European Tour final.

Wright made the perfect start to the final by taking out 136 to break throw in the opening leg with a 12-darter, before the pair traded 177 scores in leg two as King landed double nine to break straight back and level.

However, a 13-darter in the next leg saw Wright break for the second time, and the Premier League runner-up won the next three legs, with the aid of another 13-dart finish, to move 5-1 up and on the brink of victory.

King kept his hopes alive with a 13-darter of his own, firing in a 180 on his way to closing the gap to 5-2, but Wright was in no mood to allow his rival any further hope of a comeback, checking out 101 to seal the win with a 103 average and six doubles from nine attempts.

“Mervyn had beaten everyone in the other half and I had to play my best in the final, and luckily enough I played my best game of the weekend,” Wright said.

“The crowd got me hyped up and really focused and my adrenaline was crazy, and the 136 in the first leg was a great start.

“Mervyn has worked really hard to come back to where he is now and he’s had loads of semi-finals and finals in the floor tournaments this year, and he’s coming back.”

Wright’s win sees him move clear of Phil Taylor and Michael Smith into second place in the all-time list of European Tour victories with five, with Michael van Gerwen way out in front on 17.

“I learned from my mistakes and transferred that into wins, and it’s paying off,” Wright added.

“I want to win everything and it’s a great way to set myself up for the World Series events coming up in Shanghai and Las Vegas.”

King, a former winner on the European Tour in Germany back in 2014, battled through the UK Qualifiers to secure his place in the main draw in Leverkusen, before defeating Kim Viljanen, Ian White and Devon Petersen to reach the quarter-finals.

Having earlier seen Rob Cross knock out world number one and top seed van Gerwen, King then ended the rising star’s chances with a 6-2 win in the quarter-finals, before overcoming an in-form Michael Smith 6-4 to reach the final.

Although the final proved to be one step too far, King collected £10,000 in prize money for a strong weekend’s work as he reached a fifth European Tour final of his career.

“‘I’ve done really well and I’m very proud of what I’ve done after having to qualify for this event,” he said. “I’ve failed at the last hurdle but what a hurdle to fail at.

“I’ve known Peter for 20 years and he played some fantastic darts all day. I couldn’t answer that tonight and he was a worthy winner.”

Earlier in the day, Cross produced another performance to enhance his growing reputation with a 6-2 victory over van Gerwen in the third round.

World champion van Gerwen was bidding to win a third European Tour event in a row, but Cross landed three 100+ checkouts as the pair both averaged over 102 in a memorable game.