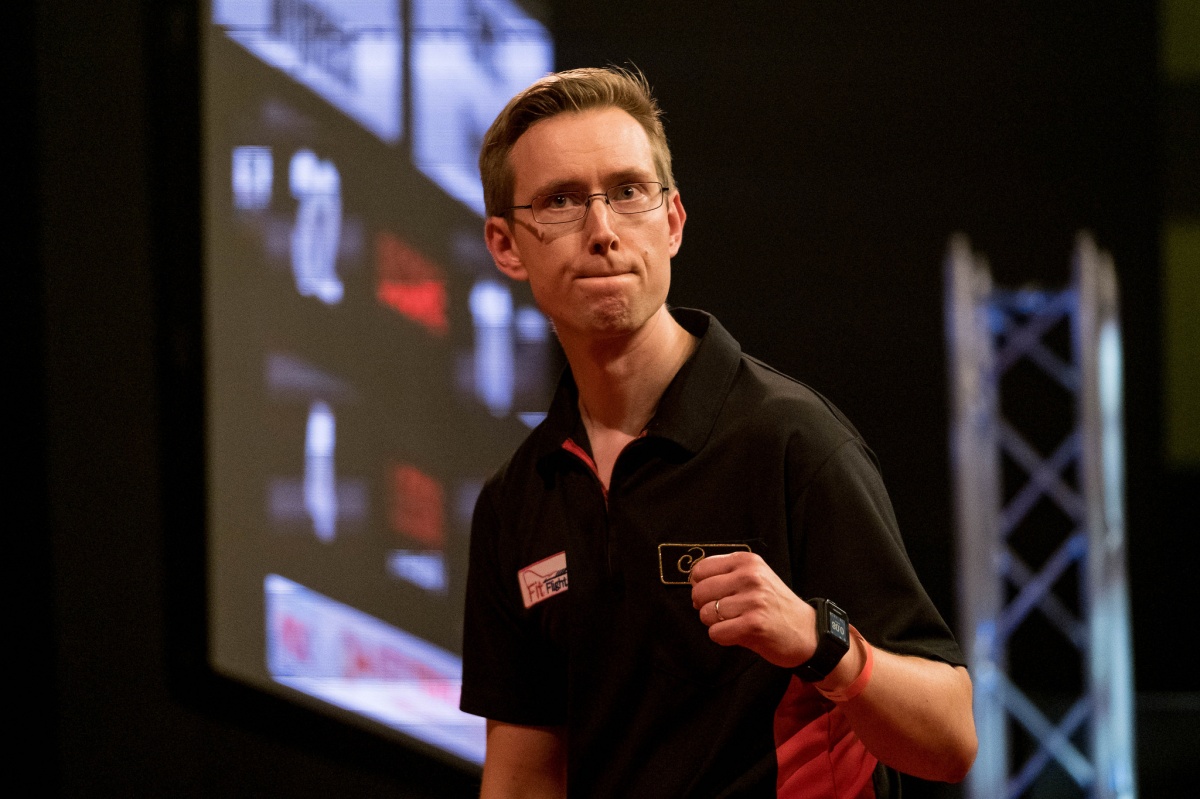 Kim Viljanen hopes his run to the quarter-finals of the Austrian Darts Open last weekend has proved he can mix it with the big boys in the PDC.

The 35-year-old, from Vantaa, in Finland, produced the shock of the tournament as he knocked out world number three Peter Wright in the last 32, before going on to reach the last eight in Vienna.

And ahead of facing Mervyn King in the first round of the HappyBet European Darts Open in Leverkusen tonight, the Finn, now ranked 80th on the PDC Order of Merit, exclusively spoke to Love The Darts about his run in Vienna, the darts scene in Finland and his plans for the future.

“Last weekend was the first PDC event where I was playing in my own level,” he said. “I am really happy.

“I got a couple of good games where I was able to keep my game steady. In the first game (against Krzysztof Ratajski) it was really close, and I was lucky to get another chance for the double in the deciding leg.

“But I was really happy that I took my chance and got the opportunity to play against Peter Wright.

“The match against Peter was really odd. I started badly and I was hitting nowhere (near my best) and I was thinking this will be over really soon.

“But luckily I was able to find my game again and was able to challenge Peter, thanks to some really good doubles and a couple of missed chances from Peter.”

After a slow start, which saw him trail the UK Open champion 2-0, Viljanen hit back by winning five of the next six legs to lead 5-3.

And despite a spirited comeback from Wright, who won back-to-back legs, it was Viljanen who clinched the decider to cause the upset.

“I was really happy for winning against such a great player as Peter Wright, and for me it shows I can challenge everyone.

“I think my last game against Joe Cullen (6-4 defeat in the quarter-finals) was my best in the weekend, but Joe played really good and didn’t miss almost any doubles.

“I am really happy about my performances during the whole weekend and hopefully I am able to compete more often.

“I know how well I am able to play, so I have believed that I could be winning some games in European Tour events.

“Unfortunately, I have not qualified for the earlier events, so this was my first chance to try this season.”

The Finn first discovered darts at an early age when his father bought a dartboard and took it home, and it was not long before a teenage Viljanen was tasting success at the oche.

At the age of 17, he won the WDF World Youth Cup, and did not drop a single leg on his way to lifting the trophy.

“It was a really big win for me and it gave me a huge boost to practice even more and get into the Finnish national team,” Viljanen recalls.

Fast forward to the end of 2014 and Viljanen was gracing the Alexandra Palace stage for the first time and playing in the PDC’s World Championship.

After losing in the preliminary round to Sascha Stein in his debut appearance, Viljanen has negotiated his way through to the first round the last two years, before bowing out to seeded players Kevin Painter, and last December, world number one Michael van Gerwen.

“To get to play on the big stage like at Ally Pally is like a dream come true,” he said. “I really enjoying playing in front of the big audience.

“In my first year in the World Championships I was way too nervous, so my performance was really poor.

“But I wanted to give it another try and the next year I was a bit better. Being on the stage is getting more enjoyable for me after every visit.”

A fourth consecutive visit to north London is the target for Viljanen for the rest of the year, but away from playing on the Scandinavian Pro Tour he hopes to make more appearances on the European Tour before the year is out.

“It would be great to play as many Euro Tour events as possible,” he said. “But there is only one spot available in the Scandinavian Qualifiers, and we have a lot of really good players in these events, so it is hard to qualify.

“Darts is really a minor sport in Finland. We have only about 1,000 licenced players, but the level is really high.

“In the PDC Nordic and Baltic Pro Tour there are many Finnish players playing who can compete at the top level, and some of them have already qualified for European Tour events this year.

“I am quite sure there might be a few Finnish players in the next Q-School, maybe I am one of them.”