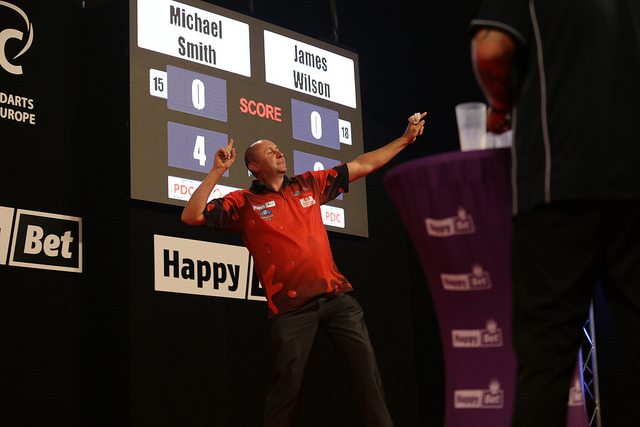 James Wilson moved into the qualification places for October’s Unibet European Championship following his run to the quarter-finals in Gibraltar this past weekend.

“The Jammy Dodger” reached the last eight on his debut in the televised tournament in Hasselt last year, beating home favourite Kim Huybrechts and Mervyn King, before losing out to James Wade in the quarter-finals.

Wilson’s bid to return to the tournament for a second year running got off to a bad start after he failed to qualify for the first three European Tour events this year.

A first round defeat to Jan Dekker in the European Darts Grand Prix a few weeks ago was the 45-year-old’s first taste of the European Tour in 2017.

But this past weekend Wilson enjoyed a fine run to the quarter-finals of the Gibraltar Darts Trophy, picking up wins over Dylan Duo, Huybrechts and Ian White, before being beaten 6-3 by Daryl Gurney in the last eight.

The Gibraltar Darts Trophy, the fifth of 12 events on the European Tour this season, was won by Michael Smith, who defeated Mensur Suljovic 6-4 in the final yesterday.

The victory propelled Smith into third place in the European Tour Order of Merit, while Suljovic has moved up one spot from sixth to fifth.

Beaten semi-finalist Peter Wright, a winner of three of the five European Tour events held so far in 2017, extended his lead at the top after nearest challenger Michael van Gerwen elected not to enter the tournament.

Gurney, who was the other beaten semi-finalist at the weekend, has leaped six places in the Order of Merit from 20th to 14th, and is now within £4,000 of the top eight.