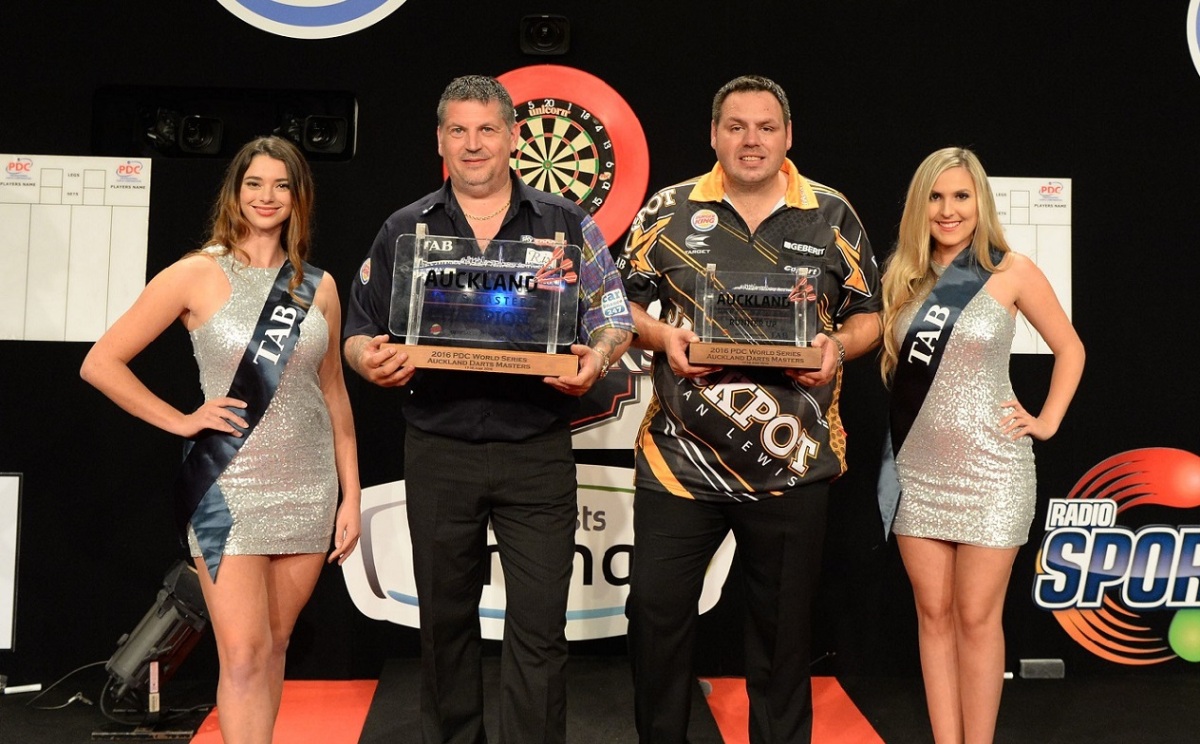 Gary Anderson claimed back-to-back titles on the World Series tour after beating defending champion Adrian Lewis 11-7 in the final of the Auckland Darts Masters at the weekend.

The reigning world champion had broken his World Series duck with victory in the Dubai Darts Masters last month, and added to his trophy collection with a first win in New Zealand on Sunday.

The world number two followed up his earlier wins over Bernie Smith and Peter Wright with a brilliant 11-7 defeat of Raymond van Barneveld, with his 111.37 average being the second best in World Series history.

“I’m absolutely delighted and I enjoyed this week,” Anderson said after winning the final. “Everybody played well and there’s been some great darts.

“Barney hit me with everything in the first four legs of the semi-final but I got a leg and when it was 4-3 it was a different game.

“A few years ago I’d have probably got beaten but now I’ve got a bit of fight in me.

“Adrian has played brilliantly too. He was great against Phil Taylor and he’s a very good friend of mine, and up on stage we try to have some battles.

“The 180s and 140s and doubles came together tonight. Adrian missed a few of the big checkouts but that’s darts.

“It’s been absolutely brilliant and the fans have been fantastic. I loved it in New Zealand last year and again this time.”

Lewis held the early advantage in the final as the pair shared the opening six legs, but Anderson stepped in following two misses from his rival in the seventh to finish 68 on double 10 to break for the first time.

The Scot also took out tops to open up a two-leg cushion, with Lewis checking out 121 on the bull to hit back. However, Anderson won the next two, despite two 180s from Lewis, to go 7-4 in front.

Jackpot followed a double nine with a 150 checkout to close the gap to one leg, but Anderson crucially took the 14th leg with an excellent 11 darter, which included six perfect darts, to move 9-6 up.

Lewis again responded to take the 16th leg, but a miss at double 12 for a 144 checkout in the next leg proved costly, as Anderson took out 86 on the bull to open up a 10-7 lead.

His eighth 180 of the final then helped to set up double 10 as he secured the title and successive victories on the World Series tour.

Defending champion Lewis had won through to the final after beating James Wade 11-9 in a heavy-scoring semi-final. The two-time world champion fired in a dozen maximums before coming from 7-6 down to win five of the last seven legs to go through.

“I thought it was a great final and I’m proud of myself,” Lewis said.

“Gary took out a few great finishes on the bull and so on, and deserved to win it. He showed why he’s a back-to-back world champion.

“I tried my best but it wasn’t quite enough tonight. I missed a few finishes myself and it could have been a different game if they’d gone in.

“Everybody played well and it was a great tournament, and I think everybody’s happy with their performance.

Anderson will be hoping to continue his dominance across the globe when the PDC World Series of Darts continues this weekend with the inaugural Shanghai Darts Masters.