The world number one stole the show in the tournament’s first visit to continental Europe, with a brilliant 164 checkout helping him on the way to a victory which saw him finish two points clear of Taylor at the top of the table.

MVG began the table-topping clash with two 180s in the first leg, but five missed doubles allowed Taylor to step in and hold throw on double tops.

The first break came in the third leg when van Gerwen checked out 80, before the Power broke back straight away after the Dutchman missed tops to go 3-1 up.

The next four legs all went with throw as the match was finely poised at 4-4, with van Gerwen then taking out a stunning 164 finish to break and go 5-4 in front.

Taylor once again immediately broke back with double 10 to make it 5-5, before MVG won the next two legs to win 7-5.

“It was amazing and it meant a lot to me,” van Gerwen said. “The pressure was really, really high but I’m glad I won the game.

“I’m top of the table and gives me great confidence for next week. My main goal is to win the title and that’s what I’m going for.

“I think it’s going to be great in London and I will be ready for it.”

Adrian Lewis booked his place in the Premier League play-offs for the first time since 2011 after beating Gary Anderson 7-2 in Rotterdam.

After play-off rival Peter Wright could only draw 6-6 with Raymond van Barneveld, Lewis knew he only needed two legs to secure fourth place and a spot at The O2 Arena in London next Thursday.

It only took Jackpot three legs to reach that target, with the two-time world champion went onto win five straight legs to finish off a 7-2 winner.

“My mind set tonight was to take no notice of what Peter did and I focused on winning against Gary,” Lewis said. “I can’t wait for the play-offs.”

Wright saw his hopes of reaching the Premier League play-offs come to an end in Rotterdam.

The Scot was in a defiant mood in front of a raucous crowd backing home favourite van Barneveld, but could only take a point from his final league game of the season.

And after Lewis comfortably beat Anderson, it means Wright will have to wait another year to make the play-offs.

Barney took out checkouts of 101, 120 and 121 but was never in front as Snakebite tried to get the win that would put the pressure on.

Wright missed two darts to win in the final leg and Barney stepped in to claim a draw, much to the delight of the sell-out Dutch crowd.

The 2009 Premier League winner had his play-off hopes ended by Wright in Manchester last week, but made sure he signed off the season on a high with a victory in the Netherlands.

Thornton took out 100 to finish off an 11 dart leg to make a strong start, before Wade went even better to take out 160 to level the match up at 1-1.

The Thorn then missed darts to go 3-1 up and Wade capitalised on the opportunity and never looked back, winning six of the next seven legs to claim a 7-3 win.

“I really wanted to come here and play well and though I couldn’t make the play-offs it’s as positive as it could be for me.

“The crowd was one of the best I’ve ever played in front of and they really supported both of us. I enjoyed it but it’s a shame I’m going out of the tournament now.” 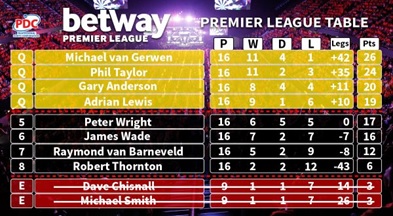