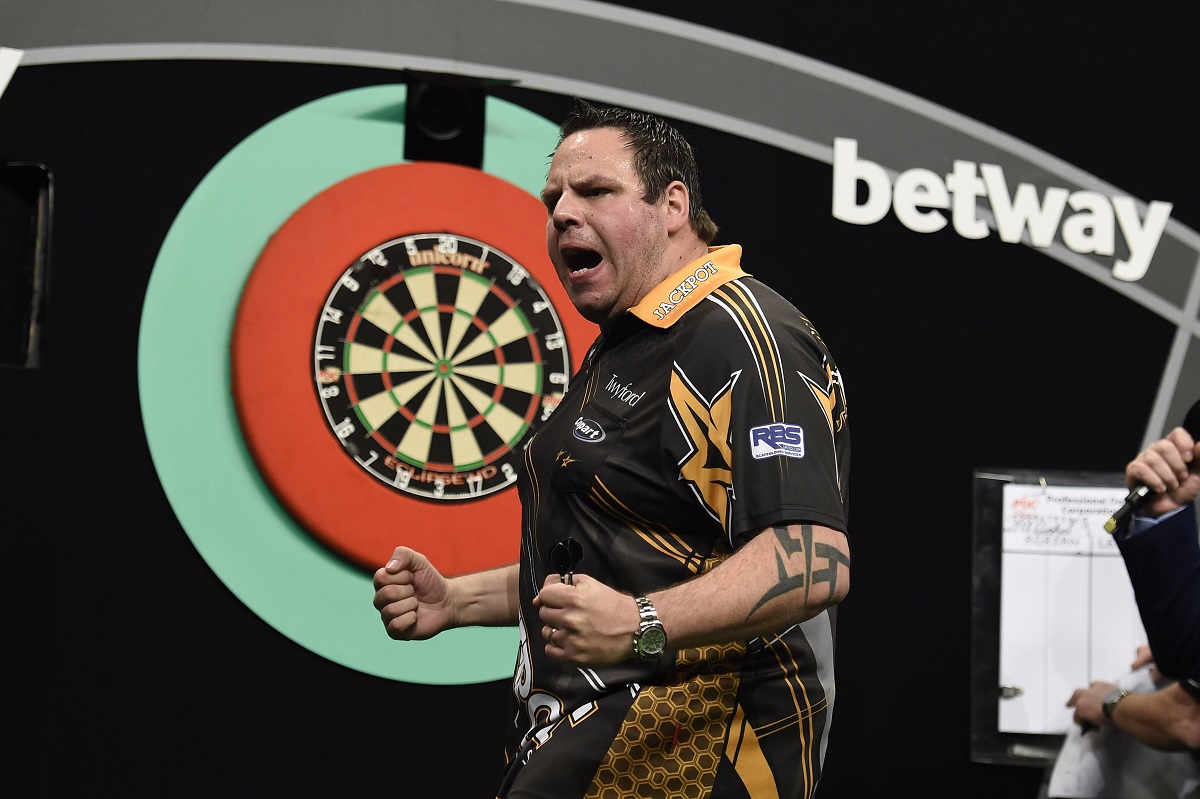 Adrian Lewis hit a brilliant nine dart leg to come from behind and beat James Wade 7-5 in the Betway Premier League tonight.

Jackpot had been flawless with his finishing to open up a 4-1 lead against Wade at the SSE Arena Belfast, before the 2009 Premier League winner fought back with four consecutive legs to go 5-4 up.

Lewis started the 10th leg with a 180 and then hit a 177 before finishing off 144 to complete his fourth televised nine darter, and the first seen in the Premier League since 2012.

The nine darter inspired Jackpot to go on and win the game’s last two legs and pinch the victory, with Wade wiring the bullseye to grab a share of the points.

It was Lewis’ second nine darter on the PDC tour in the space of a week, with Jackpot having completed the perfect leg in a Players Championship on Friday.

“I’m lost for words,” Lewis said. “It’s a really special moment for me. I took a 4-1 lead and I thought I was cruising, and before I knew it James was 5-4 up, he dug in really well and fair play to him.

“It got to the stage where I needed a massive leg, and I didn’t expect the nine darter to come from it. To hit the nine darter in front of this crowd is unbelievable, brilliant. I’m over the moon.

“I’ve hit a couple of nine darters recently and I’m really pleased with my form.”

Phil Taylor extended his lead at the top of the Premier League after beating Raymond van Barneveld 7-5.

The 16-time world champion defied a late comeback from Barney to edge out the final leg, as his unbeaten run in the Premier League stretched to 11 games.

A quick start from Taylor saw him open up a 2-0 lead, before the Power won three legs on the spin to go 5-1 in front.

At 6-2 up Taylor looked to be cruising to a comfortable victory, but van Barneveld had other ideas as he won the next three legs to force a deciding leg.

Taylor had breathing space to miss four darts in the final leg before hitting double two to win.

Michael van Gerwen and Gary Anderson shared the points in a high-quality draw at the SSE Arena Belfast.

The top two players in the PDC Order of Merit could not be separated as all 12 legs went with throw, with van Gerwen averaging 110.55 and Anderson just behind on 108.24.

Anderson, the defending Betway Premier League champion, produced the game’s crucial checkout, taking out 119 in leg 10 when MVG was sat on 48.

The pair traded 13 darters in the final two legs as both had to settle for a point.

Anderson said: “It was a good game but neither of us could get the break. I’m happy with where I’m sitting in the table.”

Robert Thornton and van Barneveld both picked up two points as they played twice in Belfast.

The bottom two players in the Premier League are still scraping for points, with the Thorn denting Peter Wright’s play-off hopes with an impressive 7-2 win in the opening game of the night.

Thornton averaged 105.63 as he eased past his fellow Scot to record his second win of the season.

The Thorn took out 113 to open up an early 3-0 lead, and then enjoyed another three leg winning spell to go 6-1 up.

Wright, who had changed his darts for the sixth time in this current Premier League campaign, kept his hopes of a draw alive by winning the eighth leg.

But it only delayed the inevitable, as Thornton wrapped up an excellent display with a 14 darter in the next leg to complete a 7-2 win.

The Scot then missed out on the chance to climb off the bottom, as van Barneveld won 7-4 in their clash at the end of the night.

The match looked finely poised at 4-4, but Barney reeled off three legs on the spin to clinch a 7-4 win and reopen a three-point lead over Thornton.

The Dutchman stormed into a 3-1 lead, but Thornton came back with consecutive legs to square the match up at 3-3.