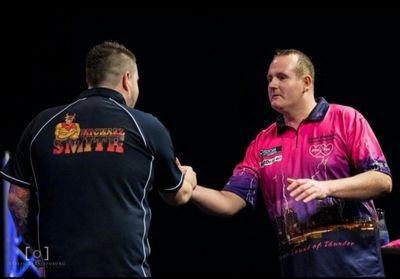 The two-time European Tour qualifier, Pete Dyos, talks us through his darts memories

That was Steve Beaton beating Richie Burnett to win the BDO World Championship in 1996.

They were a set of Unicorn 24g Phil Taylor darts.

The first team I played for was The Railway Club in Cricklewood.

I’ve not played on TV but I have played on the European Tour in Gibraltar in 2014 which was streamed live on the internet. I won my debut against Jason Lovett 6-3 and then lost 6-4 to Justin Pipe in the next round.

My first nine darter happened when I was playing against Trevor Ellacott, an ex-Wales international and county legend. The last one I hit was against Brett Claydon.

I’ve not won a professional tournament but my first win on the PDC Pro Tour was in 2013 when I beat James Hubbard 6-1 in the first round in Wigan. I’ve qualified for a few of the European Tour events on the PDC circuit, as well as the UK Open in 2014.