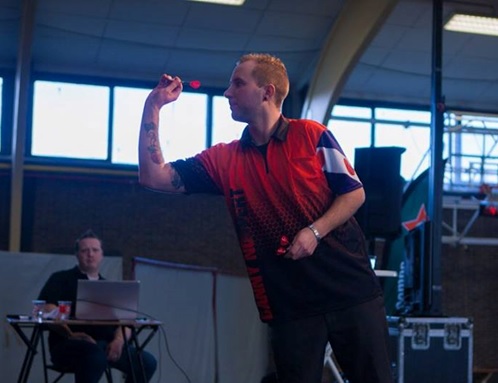 Danny Noppert picked up his second title on the BDO circuit this year after winning the inaugural Napoleon Games Masters of Waregem on Sunday.

The young Dutchman defeated recent HAL Masters winner Geert de Vos 3-1 in the final to continue his impressive start to 2016.

Last month Noppert won the Scottish Open to claim his first BDO ranking title, with his weekend success in Belgium seeing him maintain his rise up the rankings within the organisation.

Noppert began his title-winning tournament with a 4-0 win over Patrick van der Weegen, before a 13 dart leg secured him a 4-1 triumph over Tony West.

A 4-1 win against Jody Waalboer was followed by a last 16 clash with David Debrael, which went all the way to a deciding leg.

The Dutch star came through 4-3 to book his place in the quarter-finals, where he enjoyed simpler progression with a 5-1 victory over Ilja Feldhaus.

Noppert then took care of recent HAL Open champion Darius Labanauskas 2-0 in sets in the semi-finals, before beating de Vos on the stage to lift the trophy and take home the €2,000 cheque.

The previous day Noppert had suffered an early exit while playing in the Top of Waregem, which was won by Latvia’s Madars Razma.

Razmataz scooped his first title of the year after beating Dave Parletti 3-0 in Saturday’s final.

Razma’s route to the title began with a whitewash 4-0 win over Philip van Ginkel, before 4-1 triumphs against both Sven Carlier and Jimmy Hendriks sent the two-time Latvian National Champion into the last 16.

A hard-fought 4-2 win over Labanauskas continued Razma’s run, with a 5-2 victory against Shaun Carroll getting him into the last four in Belgium.

Razma eased to a straight sets 2-0 win over Roger Janssen to book his place in a final for the first time since the Scottish Classic last June.

There he beat England’s Parletti 3-0 to take home the trophy and the €1,350 winner’s prize.

Elsewhere, Anastasia Dobromyslova won her first tournament of 2016 by beating Rachel Brooks 2-0 in the Top of Waregem Ladies final, while Deta Hedman saw off Aileen de Graaf by the same scoreline to win the Masters of Waregem title.