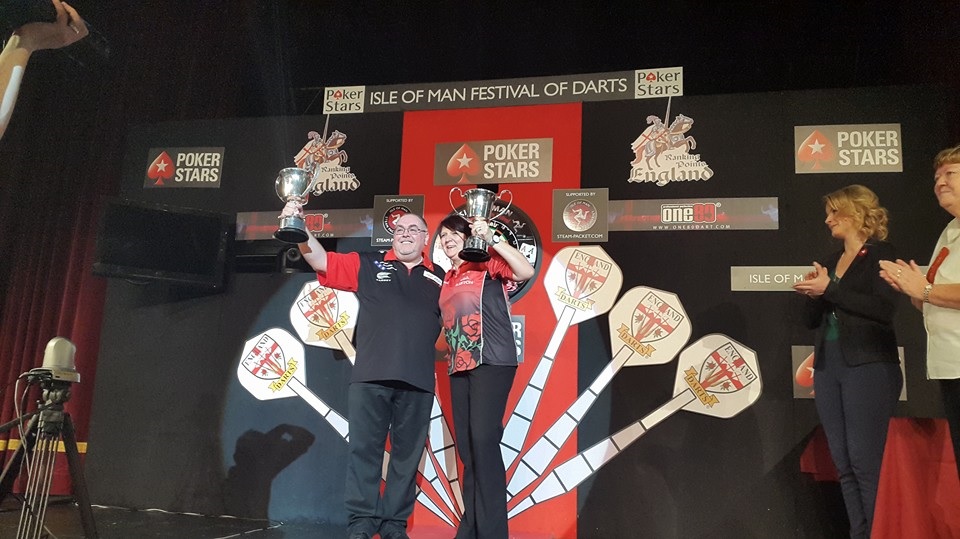 Tony O’Shea won the PokerStars Isle of Man Open on Sunday to end his 14 month run without a BDO ranking title.

The popular Silverback defeated Ryan Joyce 6-4 in the final to lift his first big title since winning the Jersey Classic at the end of 2014.

O’Shea came through a field of hundreds of players at the Villa Marina Complex on the Douglas Promenade, including the BDO’s number one Glen Durrant in the semi-finals to take home the title and the £3,000 winner’s cheque.

The Stockport thrower had begun the weekend well with a quarter-final appearance in the Isle of Man Classic, with Rhys Hayden edging out O’Shea 4-2 in the last eight.

Silverback would gain his revenge on the youngster though, as he beat the 21-year-old 4-3 in the last 16 of the Open.

O’Shea’s run to the Open title started with a 3-0 whitewash over Dean Sewell, with a 3-1 success against Gino Vos following on the streamed board in the last 128.

The whitewash victories continued for the 54-year-old, as after seeing off Alan Young 4-0, O’Shea defeated Conan Whitehead by the same scoreline to advance into the last 16 of the tournament.

After beating Hayden in a deciding leg to avenge his earlier defeat to Lightning, the three-time Lakeside finalist eased past Steven Robertson 4-1 in the last eight.

O’Shea squeezed past Durrant 5-4 in a high quality semi-final, which saw Duzza average over the 100 mark in bowing out of the competition he reached the final in 12 months ago.

Dennis Harbour was the winner of the Open in 2015 but saw his defence of the title end in the last 32 stage, as after recording comfortable wins against Warren Larkin, Adrian Rouke and Wouter Vaes, the holder was beaten 4-3 in a deciding leg by Jimmy Hendriks.

There were plenty of shocks in beaten 3-1 by Joyce in the last 128, while fourth seed Hughes lost out in a deciding leg to Hayden in the last 32 of the Open.

Darren Layden knocked out seventh seed Martin Phillips 4-1 in the same round, before Durrant saw off eighth seed Darryl Fitton in a thrilling quarter-final clash which went the distance.

Joyce then continued his memorable run as he took out another former world champion in the last eight, beating Scott Mitchell 4-2 to set up a semi-final meeting with Martin Adams.

Wolfie had looked in imperious form in the previous round after he averaged 111.33 in his 4-1 win over Mark McGeeney.

However, Joyce kept his hopes of a maiden BDO ranking title alive as he beat the three-time Lakeside winner 5-1 to progress.

O’Shea drew upon his experience in the final, which was a scrappy game but one the Silverback came out on top in to pick up his first ranking title since November 2014.

Elsewhere at the Isle of Man Festival, Scott Mitchell won his first title of 2016 after beating Geert de Vos 6-2 in the Okells Men’s Classic final.

Lisa Ashton came through a decider to beat Deta Hedman 4-3 in the final of the PokerStars Lades Open, with Hedman having earlier edged past Rhian Griffiths by the same scoreline to win the IOM Events Services Ladies Classic.

The Men’s Pairs final was also decided in a last leg as Tony O’Shea and Darryl Fitton got the better of Michael Meaney and Stephen Lennon 3-2 in the final.

Rachel Brooks and Hedman enjoyed an easier path to victory in the Ladies Pairs final as they whitewashed Ashton and Trina Gulliver 3-0 to lift the trophy.