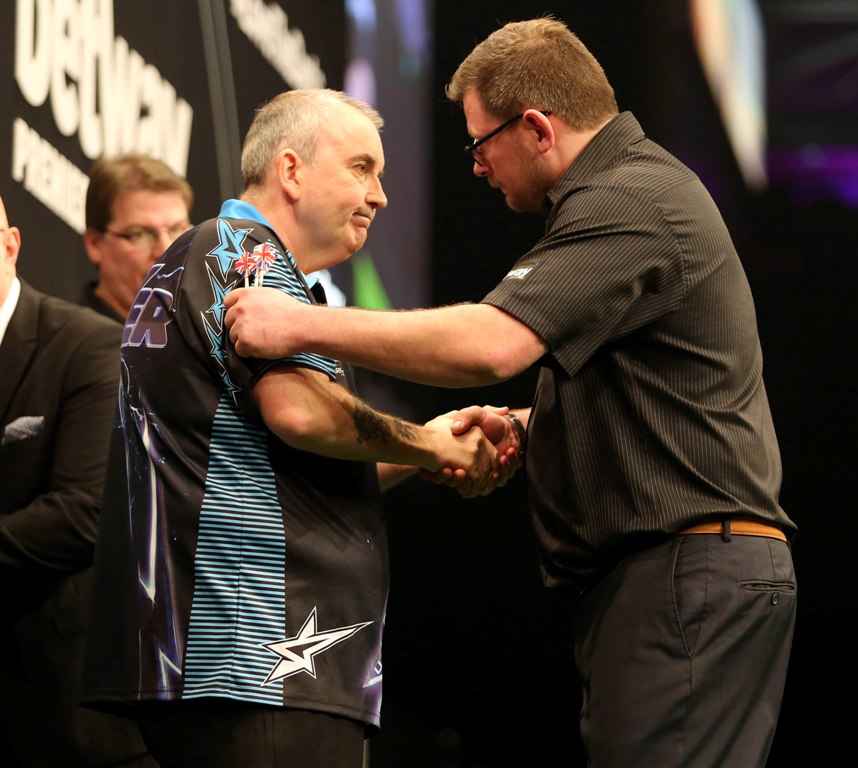 James Wade made it two wins from two in this season’s Betway Premier League, beating debutant Michael Smith 7-4 to kick-off the second night of the tournament.

With Smith’s scheduled opponent Robert Thornton being ruled out earlier in the day with a chest infection, Wade stepped in to play the first of his two games at Newcastle’s Metro Radio Arena.

After the first four legs of the contest went with throw, Smith broke in the fifth leg to go 3-2 up.

However, Bully Boy then spurned several attempts to go 4-2 in front, and despite levelling the match at 4-4, it was Wade who powered home. The Machine won the next three legs to complete a 7-4 victory and leave Smith still pointless.

Peter Wright produced an unlikely comeback to keep up his winning start to the new Betway Premier League season.

Snakebite was trying out a new set of darts as he took on Raymond van Barneveld last night.

In a below par clash, Barney punished Wright for four missed doubles in leg six to take a 4-2 lead, but then the colourful Scot returned the favour.

After van Barneveld missed three darts to extend his advantage to 5-2, Wright stepped in to break back.

With the match finely poised at 5-5, Barney missed a dart at tops to seal a point before Wright took out 75 and then hit 177 to leave 24 to wrap up an unlikely win.

Adrian Lewis climbed to the top of the Betway Premier League after seeing off Dave Chisnall 7-4 in Newcastle last night.

Jackpot raced into a 4-0 lead as two of the in-form players from last week went head-to-head.

Chisnall got off the mark in leg five with a 74 checkout, but Lewis restored his four-leg cushion after Chizzy crucially missed two darts to cut the deficit even further.

A comfortable hold of throw ensured at least a point for Lewis in the seventh leg, before Chizzy reeled off three legs to set up a nervy finish.

Jackpot spurned five match darts to complete a 7-2 win, but made sure of the win with a 12 darter on throw in the 11th leg.

The top two ranked players on the PDC Order of Merit faced off on the second night of the tournament last night.

Anderson sat out the opening week through illness and made a strong start on his return with a 14 darter giving him the first leg.

Van Gerwen then hit back to take the next three legs to go 3-1 up.

Two holds of throw for both players saw the score reach 5-3, with MVG following up an 11 dart leg with a 12 darter to break the Anderson throw again.

Van Gerwen then took out 72 to cap off an impressive performance.

The Power looked in imperious form as he ended Wade’s winning start to this year’s Betway Premier League, and secured his first points of the new season.

Taylor broke throw in the very first leg to take an early lead, which he doubled with a 66 checkout.

Wade got off the mark in leg three by taking out 78, before a killer 122 checkout from Taylor maintained his three-leg cushion.

Against the Taylor throw, Wade had scored 180, 140 and 140 to leave 41 after just nine darts. But two treble 18s and a double seven completed a crucial 12 dart leg for the Power.

Taylor never looked back after that and sealed a double break in the next leg, after Wade missed a dart at tops for a 116 checkout.

The 16-time world champion moved four legs clear with a comfortable hold of throw, before producing an 11 dart leg to move into a 6-1 lead.

Taylor finished off a brilliant performance with double four to complete a 7-1 victory and put his first points on the board.

“My finishing was lovely and I think that was the difference,” Taylor said. “I’m glad to get two points on the board after Barney gave me a kick up the backside.”