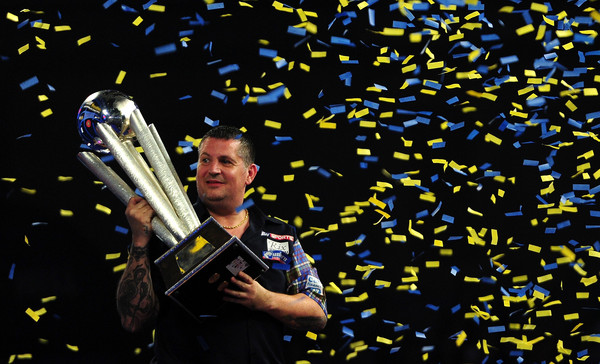 The Flying Scotsman became only the fourth first-time World Championship winner to successfully retain the title the following year, as he reversed the scoreline from the 2011 final, which Lewis triumphed in.

As well as keeping hold of the Sid Waddell Trophy for another year, Anderson also takes home £300,000, the biggest winner’s cheque in the sports history.

The Scot hit a nine-darter in the first set of his semi-final win over Jelle Klaasen last night, but was slow out of the blocks in tonight’s final, with Lewis winning the first set 3-1.

Anderson then quickly rediscovered the form that had seen him breeze into a second consecutive World Championship final, winning six of the next seven legs to go 2-1 up in sets.

The momentum continued to swing back and forth in the early stages, as Jackpot made the most of Anderson’s miscount on a checkout en route to claiming set four in a deciding leg.

Lewis fired in a brilliant 131 checkout early on in the fifth set and eventually hit double five in the deciding leg to go back in front.

The 2011 and 2012 world champion then hit back-to-back 180s in an 11-dart leg at the start of set six, before Anderson reeled off three straight legs to level the match once again.

Jackpot’s jittery finishing in the seventh set proved costly as the Scot moved into a 4-3 lead, and another whitewash set then gave Anderson a two-set cushion.

Lewis fought back in set nine, with a 121 checkout securing him the set in consecutive legs, but the defending champion then returned the favour in the 10th set to move to within one set of victory.

Jackpot would not give up and responded by taking the 11th set 3-0 to close the gap back to one set, and he looked on course to force a decider when back-to-back 180s helped him gain an early break in set 12.

However Anderson immediately broke back to level the set, and then fired in a superb 170 checkout to go 2-1 up.

It would be the shot that finally broke Jackpot’s resistance, as the Scot hit double 12 in the next leg to successfully defend his world title, in a final which included a record-breaking 34 180s.